Patrick Miller, President and CEO of Commercial Vehicle Group, stated, “Although we are facing challenging end markets in Global Construction and Agriculture, and more recently the retreat of North American heavy-duty truck build from an exceptionally high level in 2015, we are pleased with our results for the quarter. Our efforts to date in proactively reducing fixed costs has helped protect margins, align our cost structure, and improve capacity utilization to meet current and future market conditions. The recent announcement regarding our intent to consolidate our seat manufacturing capacity in North America is another step in our efforts to reduce fixed costs, while still providing adequate seat manufacturing capacity when production levels increase in the future. Additionally, we are staying focused on our growth actions in regards to new product development and the launch of our next generation products.”

Tim Trenary, Chief Financial Officer of Commercial Vehicle Group, stated, “Our gross profit margin for the quarter compared favorably to the prior-year period increasing by about 100 basis points due to ongoing efforts through our operational excellence, restructuring and other cost containment initiatives. SG&A for the first quarter, before giving effect to the $0.6 million write down of impaired assets, was approximately $1.5 million less than the prior year – that’s approximately an 8 percent reduction, period-over-period.”

First quarter 2016 revenues were $180.3 million compared to $220.3 million in the prior-year period, a decrease of 18.2 percent. The decrease in revenues period-over-period is driven primarily by the retreat of North American heavy-duty truck production volumes from near historically high levels in 2015 to more normalized levels in 2016, and the continued downturn in the global construction and agriculture markets we serve. Foreign currency translation adversely impacted first quarter revenues by $1.9 million, or 0.9 percent.
Operating income in the first quarter was $8.6 million compared to operating income of $11.2 million in the prior-year period. The decrease in operating income period-over-period was primarily the result of decreased revenues, offset by operational improvements and benefits from cost reduction and restructuring actions. First quarter 2016 results include $0.6 million of costs associated with the write-down of assets held for sale and $0.3 million of costs associated with recently announced restructuring plans. First quarter 2015 results include $0.7 million of costs associated with the closure of our Tigard, Oregon facility.
Net income was $2.6 million in the first quarter, or $0.09 per diluted share, compared to net income of $3.6 million, or $0.12 per diluted share, in the prior-year period. Earnings per share, as adjusted for special items, were $0.10 per diluted share in first quarter 2016, compared to $0.13 per diluted share in the prior-year period. Net income in the first quarter of 2016 benefited from a lower effective tax rate period-over-period.
For the period ending March 31, 2016, the Company did not have any borrowings under its asset-based revolver and therefore was not subject to any financial maintenance covenants. At March 31, 2016, the Company had liquidity of $135.3 million; $97.8 million of cash and $37.5 million of availability from our asset based revolver.

A reconciliation of GAAP to non-GAAP financial measures is included as Appendix A to this release.

Management estimates that the 2016 North American Class 8 truck production will be in the range of 230,000 – 250,000 units, normalizing from a near historically high level of 323,000 units in 2015, while North American Class 5-7 will be stable to slightly up year-over-year. In 2016, management believes there is a bias toward continuing softness in the global construction and agriculture markets. 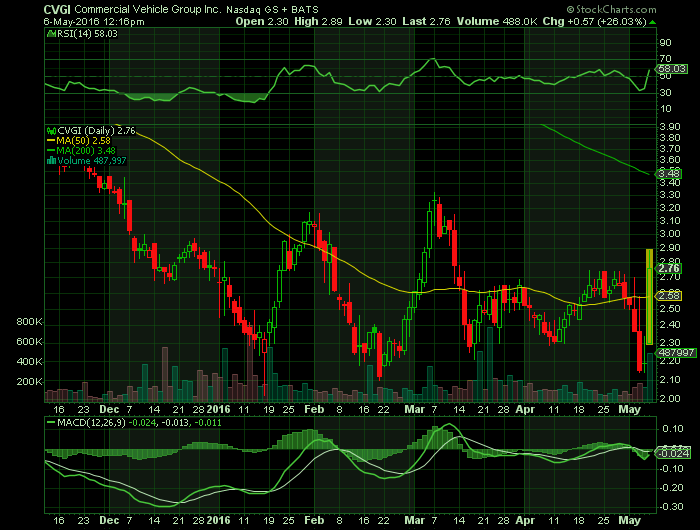