***Get our small cap profiles, special situation and watch alerts in real time. We are now offering our VIP SMS/text alert service for free, simply text the word “Alerts” to the phone number 25827 from your cell phone.
Articles: (NYSE: VRX)

Activist investor Bill Ackman says “of course” he regrets investing in Valeant, the former stock market darling that’s been hit with SEC investigations, Senate probes, and a precipitous decline in its stock price.

“There’s been a lot of brain damage in the last five weeks working with the board,” Ackman said in an interview with CNBC’s Scott Wapner on Monday.

Ackman joined Valeant’s board in March as Valeant’s CEO, Mike Pearson, announced his departure from the firm.

Ackman was also asked whether he regretted not selling his shares in Valeant at any point, rather than getting even further involved with the company by joining its board.

“Any price would have been better” than Valeant’s current price of about $31, he responded.

Now, he said, he plans to help fix the company and incite a “meaningful” turnaround.

Valeant’s stock has plunged about 86% in the past year and almost 70% since October.

Warren Buffett and Charlie Munger called Valeant a “Wall Street scheme,” enormously flawed, and “a sewer” at the annual Berkshire Hathaway shareholder meeting over the weekend.

In response to Buffett’s and Munger’s comments, Ackman told CNBC, that you can’t “indict Valeant on the actions of a few people,” and “you don’t call Valeant a ‘sewer’ because the company made a mistake.”

Among other things, Valeant has been accused of price gauging — that is, buying drug companies and raising the prices on their products. Ackman, Pearson, and Valeant’s former interim CEO and CFO, Howard Schiller, on Wednesday testified before the US Senate about those accusations.

Asked about that, Ackman told CNBC: “I think it’s wrong to buy a drug and mark the price up 5x.”

Valeant last week released its 10-K report after multiple delays. It revealed that Valeant misstated financials in the first quarter of 2015, which reduces revenue by $21 million but increases profits by $24 million.

Warren Buffett, the billionaire chairman of Berkshire Hathaway Inc., faulted Valeant Pharmaceuticals International Inc.’s habit of pursuing strategies that looked good in the short term but were doomed to come to a bad end.

“The business model of Valeant was enormously flawed,” Buffett, 85, said about the embattled drugmaker Saturday at Berkshire’s annual shareholder meeting in Omaha, Nebraska. “I watched the Senate hearings a couple days ago when Senator Collins and Senator McCaskill interrogated three people from Valeant, and it was not a pretty picture.”

Valeant has endured months of turmoil as it became the face of price increases on drugs in the U.S., attracting scrutiny from regulators and politicians. Since its August peak, Valeant has lost more than 85 per cent of its stock-market value, failed to file its annual report on time and said it is being investigated by the U.S. Securities and Exchange Commission. 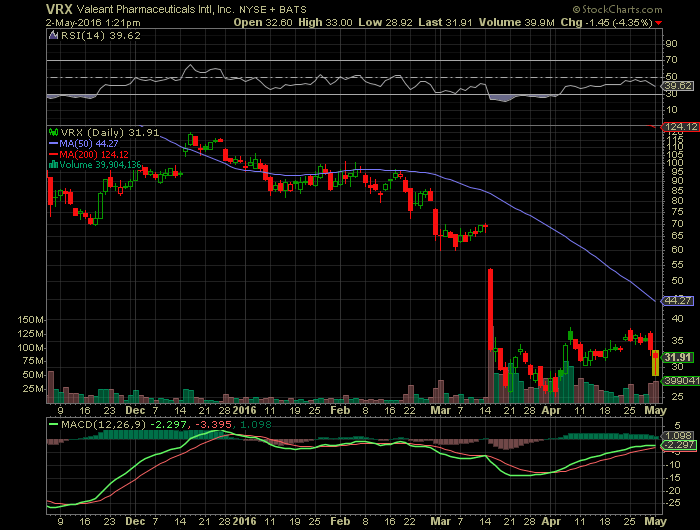