These are numbers that make traders drool. Any trader in any market would fall all over themselves to
see numbers like this. So if you’ve been on the fence, perhaps it’s time to start doing some research and
verify our numbers for yourself. We are constantly raising the bar and separate ourselves from the rest
of the small-cap newsletters as the best in business. We know with a large following comes a large
responsibility as we have everyone from institutional investors to the beginner following our profiled
securities in our newsletters. This is something we take very seriously always seeking small cap growth
companies that have both near and long-term potential for our members.

***Get our small cap profiles, special situation and watch alerts in real time. We are now offering our
VIP SMS/text alert service for free, simply text the word “Alerts” to the phone number 25827 from your cell phone.

Shares of Foresight Energy LP (NASDAQ:FELP) have received a consensus recommendation of “Hold” from the twelve research firms that are covering the firm, AnalystRatings.NET reports. Three analysts have rated the stock with a sell rating and nine have given a hold rating to the company. The average 12 month price target among brokerages that have covered the stock in the last year is $6.63.

Foresight Energy (NASDAQ:FELP) last posted its earnings results on Tuesday, March 15th. The company reported ($0.55) earnings per share (EPS) for the quarter, missing the Zacks’ consensus estimate of $0.05 by $0.60. During the same period in the previous year, the business posted $0.22 earnings per share. The company had revenue of $239.20 million for the quarter, compared to analysts’ expectations of $235.50 million. The business’s quarterly revenue was down 19.5% on a year-over-year basis. On average, analysts predict that Foresight Energy will post ($0.46) earnings per share for the current year.

Foresight Energy LP (NASDAQ:FELP) is engaged in the mining and marketing of coal from reserves and operations located in the Illinois Basin. The Company controls over three billion tons of coal in the state of Illinois. Its reserves consist principally of three contiguous blocks of high heat content (high Btu) thermal coal, which are used for longwall operations. 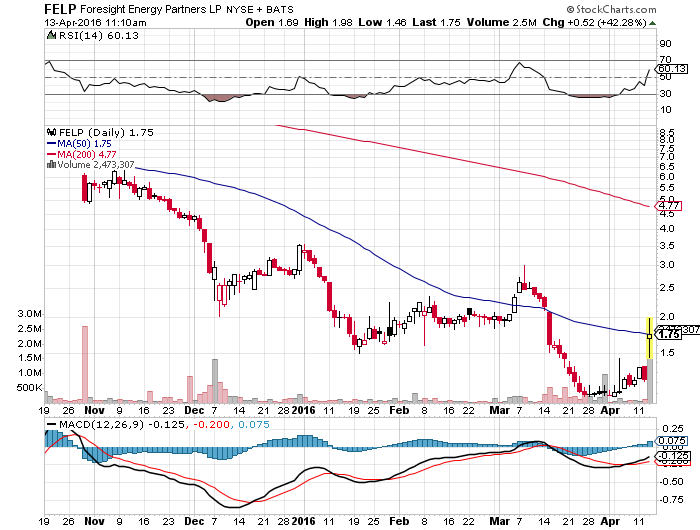 If an agreement on the terms of an out-of-court restructuring is not reached with our Noteholders and other lenders, it may be necessary for us to file a voluntary petition for relief under Chapter 11 of the United States Bankruptcy Code in order to implement a restructuring, or our creditors could force us into an involuntary bankruptcy. If a plan of reorganization is implemented in a bankruptcy proceeding, it is likely that our equity holders would be entitled to little or no recovery, and their claims and interests would be canceled for little or no consideration.

FELP announced that the Board of Directors has suspended its quarterly distribution to unitholders. FELP is also suspending guidance for 2016 pending an outcome in the negotiation with its lenders.

Broad Street Alerts has not been compensated for the mention of FELP and we do not hold any positions.