AT&T is backing away from Yahoo and taking a $100 million deal with it.
The telecom giant is extricating itself from a 15-year deal with the troubled Sunnyvale-based Yahoo, according to the Wall Street Journal. AT&T said Wednesday that it awarded a major contract to host its Web and mobile portals to Synacor Inc., effectively shifting a major portion of AT&T’s business from Yahoo. The AT&T partnership generated about $100 million in annual revenue for Yahoo, according to Sameet Sinha, an analyst at B. Riley & Co.
“We have agreed to have Synacor manage our next-generation att.net portal, AT&T-branded applications, and search,” AT&T said in a statement. Yahoo will continue to host email for AT&T customers. A Yahoo spokeswoman called AT&T a “valued partner.”

The deal provided AT&T broadband customers with access to Yahoo’s search engine and other media services on the default AT&T website. AT&T and Yahoo split the search and display ad revenue from the site, per the report.
Synacor stock shot up more than 119 percent in after-hours trading Wednesday on news of the three-year deal. The Buffalo, N.Y.-based company posted $110.2 million in total revenue in 2015. Synacor will split the search and advertising revenue with AT&T.
The news comes at a time when one of AT&T’s biggest competitors, Verizon, is considering buying up Yahoo. Verizon is reportedly a leading contender to purchase Yahoo’s core assets within the next two months for between $4 billion to $10 billion. AT&T was also reportedly interested in buying Yahoo’s assets, but dropped out of the bidding early on.
The loss of the AT&T deal could affect how much interested buyers are willing to pay for Yahoo. The company’s revenue is expected to drop to $3.5 billion in 2016, down 15 percent from $4.1 billion in 2015 and nearly $1 billion less than the $4.4 billion it recorded in 2014, according to a report from Re/code. 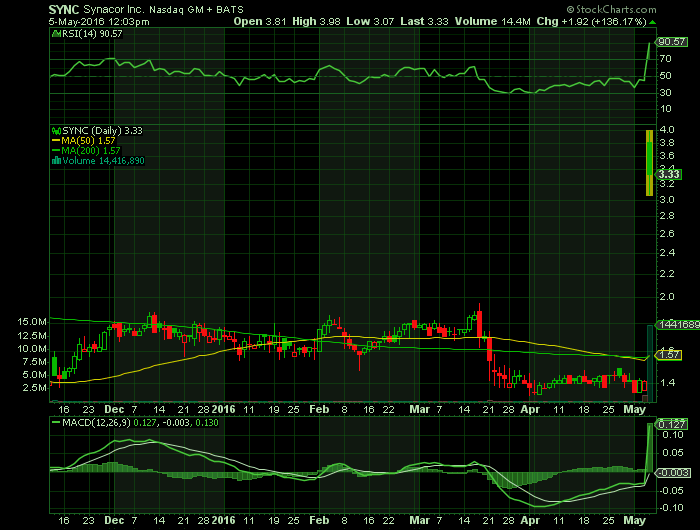