Sollpura™ (liprotamase)
SOLUTION Phase 3 Clinical Study to Expand into Europe
In September 2015, we began enrollment of the SOLUTION Phase 3 clinical study in the United States. The study will evaluate the efficacy and safety of Sollpura™ in capsule formulation in patients with cystic fibrosis who suffer from exocrine pancreatic insufficiency.
Patient accrual continues to meet our expectation with top line data targeted to be available at the end of 2016 or early 2017. For more information on the study, please visit https://clinicaltrials.gov/ct2/show/NCT02279498.
SIMPLICITY Pediatric Clinical Study expected to begin in Q2 2016
The SIMPLICITY clinical study will be the first study that uses Sollpura™ powder for oral solution. Sollpura™ will be supplied in a convenient, easy-to-administer sachet (packet, similar to sugar), which is dissolvable in about one tablespoon of water. After an initial cohort of older patients, the SIMPLICITY study will focus on administration of Sollpura™ to pediatric patients ranging in age from 28 days to seven years.
Blisibimod – Systemic Lupus Erythematosus (“SLE”)
Phase 3 CHABLIS-SC1 Clinical Study Enrollment Completed
We are on track to provide topline efficacy and safety data from the CHABLIS-SC1 study during Q3 2016.
Phase 3 CHABLIS 7.5 Clinical Study deployment continues on track
The CHABLIS 7.5 study will evaluate the efficacy and safety of blisibimod when administered on top of standard-of-care medication in patients with severe, seropositive SLE who are inadequately controlled with corticosteroids. Patient eligibility for this study is informed by responder traits identified in the Phase 2 study with blisibimod as well as the large Phase 3 programs with other BAFF inhibitors. For more information about the CHABLIS 7.5 study, please visit https://clinicaltrials.gov/ct2/show/NCT02514967.
Blisibimod – IgA Nephropathy
Phase 2 BRIGHT-SC Data Planned for Q2 2016
Following our receipt of a termination notice from Zenyaku and the subsequent expiration of the 120-day termination period on January 7, 2016, we elected to stop further enrollment in the BRIGHT-SC clinical study. We have enrolled 57 patients, 45 of which remained in the study. We plan to conduct a proof-of-concept efficacy analysis when substantially all patients have received a minimum of six months of therapy in Q2 2016. This analysis will examine the effects of blisibimod versus placebo in the proportion of qualifying patients who achieve a complete response (“CR”) and a partial response (“PR”) at six months. CR is defined as the proportion of patients with baseline UPE of greater than two grams per 24 hours, achieving UPE of less than one gram per 24 hours or a 50% reduction in UPE from baseline, and the proportion of patients with baseline UPE between one and two grams per 24 hours, achieving UPE of less than one gram per 24 hours and a 50% reduction from baseline. PR is defined as the proportion of patients achieving urinary protein excretion (“UPE”) of less than or equal to one gram per 24 hours. Based on our previous discussions with regulatory authorities, we believe an evaluation of the change in proteinuria could serve as a surrogate endpoint to support an accelerated or conditional approval in various key commercial geographies. Following the completion of the BRIGHT-SC study we intend to explore a Special Protocol Assessment from the US FDA to ensure final concurrence on the willingness to consider proteinuria as a surrogate endpoint, the timing for completion of enrollment of the post marketing confirmatory study and blisibimod’s eligibility to receive orphan designation.
Management Update

On January 7, 2016, we expanded our executive management team through the appointment of Craig Thompson as our President and Chief Operating Officer. In this role, Mr. Thompson will oversee both our late stage development programs and launch readiness efforts.
On March 7, 2016, our Board appointed Dr. James Pennington as our Interim Chief Medical Officer, effective April 1, 2016, following the departure of our current Chief Medical officer, Dr. Colin Hislop. Dr. Pennington joined Anthera in 2007 and has over 40 years of successful clinical development and commercialization experience including 14 drug approvals and 10 registration ex-US approvals including both small and large molecule therapeutics.
Summary of Financial Results

Anthera Pharmaceuticals is a clinical-stage biopharmaceutical company focused on developing and commercializing products to treat serious and life-threatening diseases, including exocrine pancreatic insufficiency due to cystic fibrosis, lupus, lupus with glomerulonephritis, and IgA nephropathy. Additional information on the Company can be found at www.anthera.com. 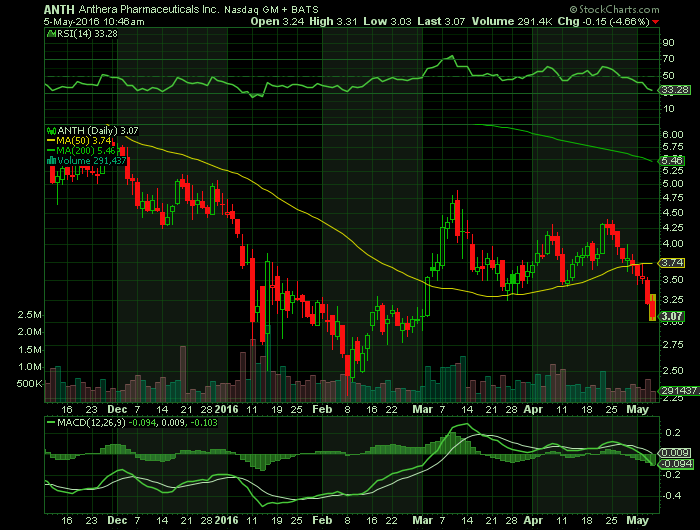