Nutrisystem Inc. NTRI reported first-quarter 2016 adjusted earnings of 13 cents per share, which beat the Zacks Consensus Estimate by 6 cents and surged 30% on a year-over-year basis. Adjusted earnings exclude 4 cents of initiative expenses related to the South Beach Diet and Shake360.

Revenues increased 18.1% to $162.1 million and edged past the Zacks Consensus Estimate of $152 million. Revenues also beat management’s guided range of $148 million to $158 million. The impressive performance was primarily driven by new customer growth, improved reactivation revenue ($40 million) and higher revenue per customer in the direct channel.

Revenues from new customers in their initial diet cycle were up over 15% in the quarter, primarily driven by increased customer starts, improved pricing, higher Shake purchases and increased sales of more flexible options that the company is marketing.

Adjusted EBITDA (excluding initiative expenses of $1.7 million for the South Beach Diet and Shake360) rose 21% year over year to $9.7 million.

However, operating income declined 16.3% year over year to $3.8 million due to higher expenses.

During the quarter, Nutrisystem authorized a share repurchase program, whereby the company may repurchase up to $50 million of its common stock over the next 18 months in open market transactions.

Revenues from retail channel are now projected at $36 million, up almost $1 million from the year-ago quarter.

For full-year 2016, Nutrisystem expects an improvement in gross margins on a consolidated basis, buoyed by higher average selling price and effective management of food and distribution costs. 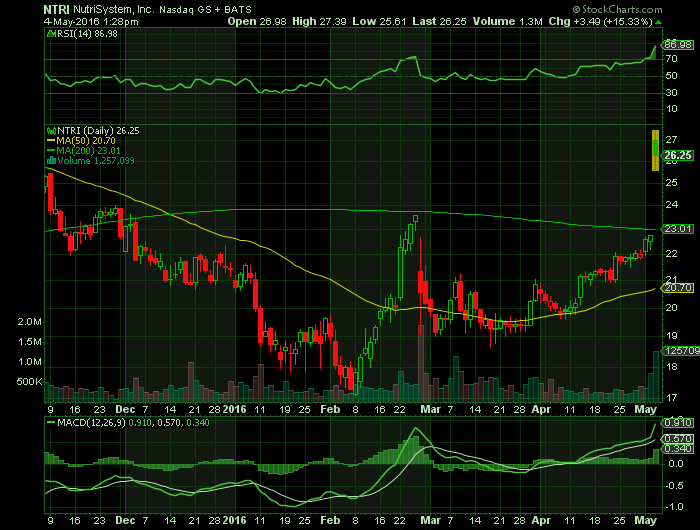