“Our momentum from 2015 carried into the first quarter of 2016, as we continued to make important clinical progress in our microbiome-focused programs. During the quarter, we announced positive topline results from the second Phase 2 clinical trial of SYN-010 in patients with IBS-C. We are scheduled to present detailed data supporting previously reported positive topline data from both SYN-010 Phase 2 clinical trials in a poster presentation at DDW 2016 later this month. We also look forward to holding an end of Phase 2 meeting with the FDA this summer to discuss late-stage clinical trials of our SYN-010 program,” said Jeffrey Riley, President and Chief Executive Officer of Synthetic Biologics. “With this sustained progress, we are well positioned to initiate Phase 3 clinical trials of SYN-010 during the second half of this year.”

Mr. Riley continued, “We’ve also made important strides with our program to prevent C. difficile infection and antibiotic-associated diarrhea. Patient enrollment is complete in the second Phase 2a clinical trial designed to evaluate the GI antibiotic-degrading ability and the safety of SYN-004 in the presence of a proton pump inhibitor. In addition, patient recruitment in our Phase 2b proof-of-concept clinical trial for SYN-004 has been strong as we have enrolled approximately 185 patients in this global clinical trial. We look forward to further progress in our SYN-004 clinical trials and are expecting topline results from the second Phase 2a clinical trial during the second quarter of 2016 and an interim analysis of blinded data performed by an independent data monitoring committee for the Phase 2b clinical trial this summer.”

Synthetic Biologics, Inc. (NYSE MKT: SYN) is a clinical stage company developing therapeutics to protect the gut microbiome while targeting pathogen-specific diseases. The Company’s lead product candidates in Phase 2 development are: (1) SYN-010 which is intended to reduce the impact of methane-producing organisms in the gut microbiome to treat an underlying cause of irritable bowel syndrome with constipation (IBS-C) and (2) SYN-004 which is designed to protect the gut microbiome from the effects of certain commonly used intravenous (IV) beta-lactam antibiotics for the prevention of C. difficile infection (CDI) and antibiotic-associated diarrhea (AAD). In collaboration with Intrexon Corporation, the Company is also developing preclinical stage monoclonal antibody therapies for the prevention and treatment of pertussis and novel discovery stage biotherapeutics for the treatment of phenylketonuria (PKU). For more information, please visit Synthetic Biologics’ website at www.syntheticbiologics.com. 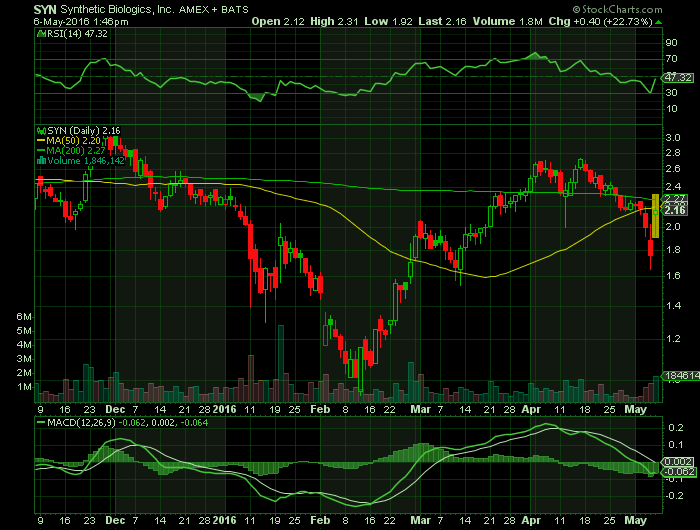