***Get our small cap profiles, special situation and watch alerts in real time. We are now offering our

VIP SMS/text alert service for free, simply text the word “Alerts” to the phone number 25827 from your cell phone.

Repros Therapeutics Inc.® (Nasdaq: RPRX) reported that vaginal administration of Proellex at doses of both 6 and 12 mg achieved significant reduction in excessive menstrual bleeding, the key symptom of uterine fibroids.

Normal menstrual blood loss in a menstrual cycle is approximately 35 mL. Woman experiencing blood loss of >80 mL are considered to suffer from menorrhagia or excessive menstrual bleeding. In this small Phase 2b study, 13, 15 and 14 women with confirmed uterine fibroids were enrolled in the 6mg, 12mg and placebo arms, respectively. At baseline, the mean amount of blood lost for one menstrual cycle was 255 mL, 274 mL and 238 mL for each arm, respectively. The blood loss ranged from a low of 94 mL to a high of 654 mL. The most severe menstrual bleeding at baseline was observed in the 12 mg group. Blood loss was determined by collecting all sanitary products used from an individual and then an alkaline hematin assay was performed to estimate the actual amount of blood collected in the pads.

When a sufficient concentration of Proellex® is achieved in circulation, amenorrhea (cessation of menses) is achieved. Just over half, 52%, of Proellex®-treated subjects became amenorrheic with no evidence of a dose effect. All subjects treated with Placebo continued to menstruate throughout the 18 week dosing period. The p-value for this comparison is 0.0011. Bleeding diaries consistently report a statistically significant difference in the number of days of bleeding and bleeding intensity between those treated with Proellex® and Placebo.

Along with changes in menstrual patterns, fibroids measured by MRI were reduced in volume in the Proellex®-treated arms by 18% while the Placebo group showed continued increase in size, p= 0.0437.

The drug was generally well tolerated. Women in the drug arms continued to exhibit levels of estradiol consistent with bone preservation.

The Company believes Proellex® represents a significant advantage over GnRH agonists and antagonists in the treatment of uterine fibroids. Once both the vaginal and oral studies complete both 18 week courses of treatment the Company plans to request an end of Phase 2 meeting with the FDA to jointly discuss plans for Phase 3. 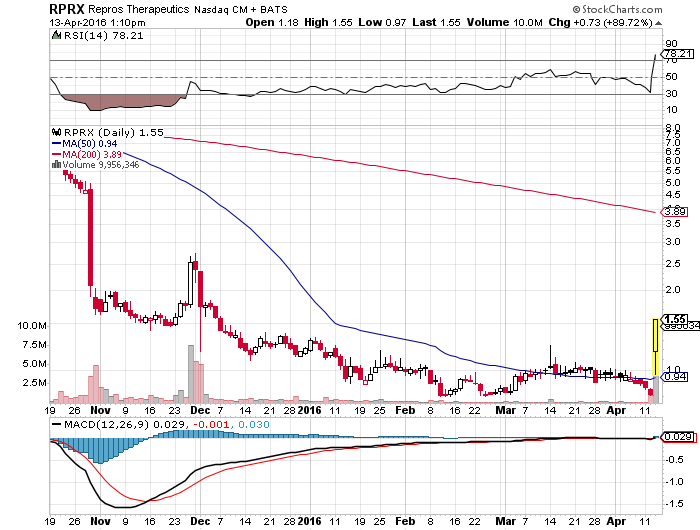 Broad Street Alerts has not been compensated for the mention of any of the securities in this article and we do not hold any positions.