“The first quarter of 2016 was an active one for us, as we introduced a number of new products and took further measures to strengthen our balance sheet and streamline the Company’s operations,” said Bob Stebenne, Chief Executive Officer. “While revenue was down year-over-year, reflecting the timing of product rollouts, we continued our marketing initiatives while reducing debt, managing costs, and improving gross margins net of foreign exchange and demurrage expenses. We saw our G&A decline nearly 9% versus 2015, net of litigation expenses, evidence of our ongoing focus on cost-controls, while generating $6 million of operating cash flow. We believe the coming quarters will benefit from additional new product introductions – leading to higher top-line growth and overall improved operating results.”

Net sales for the three months ended April 2, 2016 were $49.7 million compared with $53.0 million for the three months ended April 4, 2015. Excluding $0.5 million of unfavorable foreign exchange on a constant currency basis, core branded sales declined by 5.3% year-over-year. The decrease was primarily due to channel inventory reductions in advance of new product launches as well as delays in certain product introductions.

Adjusted EBITDA and constant currency adjustments are non-GAAP metrics. Adjusted EBITDA excludes various items that are detailed in the financial tables and accompanying footnotes reconciling GAAP to non-GAAP results contained in this release. An explanation of these measures also is included under the heading below “Use of Non-GAAP Financial Information.”

Management will host a conference call to discuss the financial results tomorrow, May 6, at 9:00 a.m. ET. To listen to the live call, visit the Investor Relations section of the Company’s website at www.summerinfant.com or dial 866-652-5200 or 412-317-6060. An archive of the webcast will be available on the Company’s website. 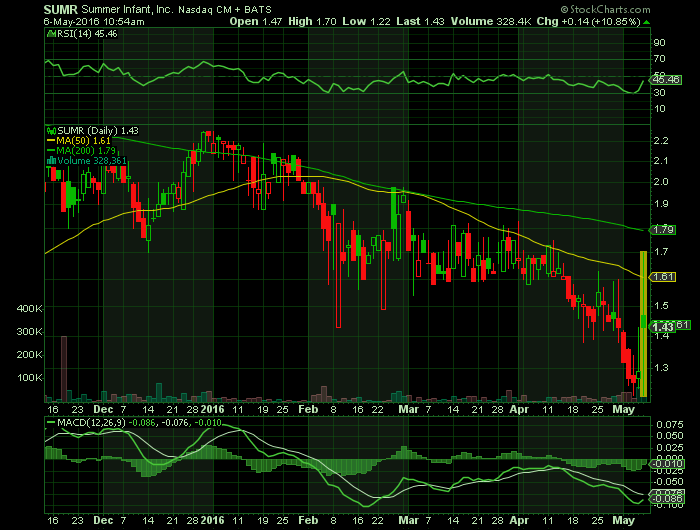