NEW YORK (TheStreet) — The Valspar Corp. (VAL – Get Report) stock is advancing 28% to $107.30 in pre-market trading on Monday after the Minneapolis-based paint company agreed to be acquired by its competitor The Sherwin-Williams Co. (SHW) in a deal valued at $11.3 billion.

On Sunday, the companies announced the transaction, which is expected to close by the end of the 2017 first quarter and is subject to shareholder and regulatory approval.

Cleveland-based Sherwin-Williams will pay Valspar shareholders $113 per share, representing a 35% premium to Valspar’s stock closing price on Friday, according to Deutsche Bank analysts.

The offer is expected to be the best Valspar will receive after being an acquisition target in the paint industry for some time, Deutsche Bank said in an analyst note this morning.

Annual synergies are estimated to reach $320 million within two years after closing, Sherwin-Williams CEO John Morikis said in a statement.

Separately, Valspar has a “buy” rating and a letter grade of B at TheStreet Ratings because of the company’s good cash flow from operations and expanding profit margins.
TheStreet Ratings objectively rated this stock according to its “risk-adjusted” total return prospect over a 12-month investment horizon. Not based on the news in any given day, the rating may differ from Jim Cramer’s view or that of this article’s author. 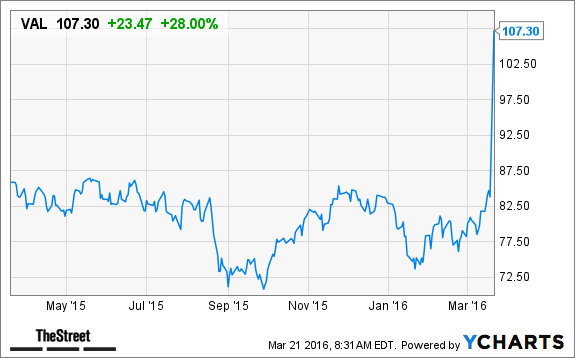